skip to main | skip to sidebar

Canadian racism, Ku Klux Klan and ethnocide, then and now 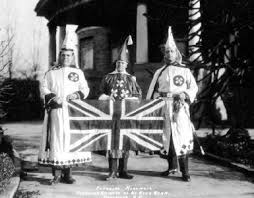 When they mention the natives related problems in Québec to accuse Quebecers of racism, anglo-canadians are being highly hypocritical.
They're in no position to give anyone a lesson.

It is their canadian federal system who responsible for suffering caused to the Amerindians everywhere in Canada.

It is their federal system who created the "reserves" where these communities slowly decayed, towards the not-official-but-obvious goal of achieving their extinction.


Robin Philpot demonstrates that the natives are better treated in Québec than in any other canadian provinces.

Furthermore, the Québec National Assembly recognized the native communities as different nation from the time of Prime minister René Lévesque, former leader of the Parti Québécois.

The rates of suicide and alcoholism are much lower in Quebec than anywhere else in Canada.

Their rate of assimilation is lower; the government of Québec encourages the preservation and the promotion of the Amerindian languages.

We know that the racist movements orangistes (Protestants) and the powerful racial and hainous movement Ku Klux Klan (KKK) proliferated starting in the 20s (and in Ontario from 1925) in Anglo-Saxon Canada, especially in the Conservative Party, with the open support of Prime Minister Bennett and many others.

They are the same people who hanged Louis Riel, leader of a large movement asking equal rights for the canadian francophones.

Also see THIS PAGE on THIS SITE concerning the loyalists orangists anti-francophones and anti-catholics.

These extremist groups, of which we can believe that they are not disappeared (in fact they are the actual Canada government with Harper and friends) fought cruelly against the citizens who were not of white race, Protestant and English-speaking.

This is not prehistoric, it is the day before yesterday!
Canada is not, and never will be my country.